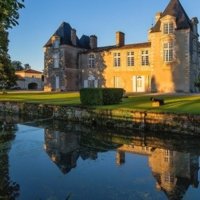 In his paintings, Guillaume Toumanian seeks to bring out evanescent in-motion images, in a quest of rhythm between substance and more opaque and translucent units - sorts of breaks in the enigmatic tumult of his gestural paintings. If photographs are used on a daily basis for the works, Guillaume Toumanian pushes them away in order to let a powerful painting spring out, stretched forward and backward, between reality and fantasy.

A call for contemplation and for introspection, figurative abstractions of Guillaume Toumanian bring up some paradises, lost somewhere between heaven and earth, presence and absence, apparitions and light-dispersing figures structures by tiny light dots. Both peaceful and overwhelming, Guillaume Toumanian's intense painting has to be looked and felt even more that is has to be explained. That will eventually happen when one accepts to confront themselves with it with abandonment, recognise mixed memories and let go on emotions.

Turning point in the carreer of Guillaume Toumanian as well as in the position of Château d'Issan as a major art place, the "Memento" exhibition, organised during Vinexpo, will receive Pascale Dewambrechies on Tuesday, June 13 for a reading and dedication meeting of her second novel, Juste la lumière (Editions Passiflore).

Visits & Tastings
ACTIVITIES
France / Bordeaux
Private Tour & Tasting in Chateau d'Issan
Château d'Issan
On this exclusive tour you will discover the efforts and precision that goes into making some of the finest wines in Margaux. Then following this visi...